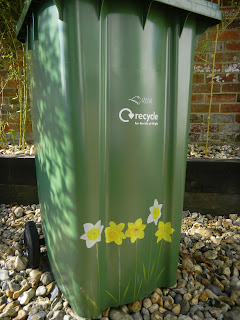 As I type I can hear the whirring and wheezing of the Islands brand new 61 plate waste trucks. Its bin day for our street. 3 months ago the Isle of Wight joined the mainland posse again, (it has been said the IOW is 10 years behind our neighbours in some respects, and with this one many wish it were longer) by starting a resident lead recycling programme. As we all know here, each house was given a new wheelie bin and smaller waste caddy in January. Distributed by a mainland firm, apparently.
And the financial cost of all this? I don’t know but presumably its cheaper than digging and filling more holes on the Island. Perhaps so when you consider the governments landfill tax. Environmental gains and harm? Thats much to complicated for me to discern. But, lets at least be honest about why we recycle, or rather why we now have to. Is that sense of  recycling pride deserved or rather misinformed?
And so, we all now have to sort through our rubbish, wash soiled containers and the like, and separate our rubbish into different containers for alternate week collection. Apparently, the recyclable clean stuff gets taken to the mainland and sorted, and who knows from there… turned into something else or maybe used to fill a hole on another island? The rest of our dirty stuff, I am told, gets burnt in Newport and the gas produced reclaimed into a use-able energy- which i read somewhere is keeping the prisons in power. And then theres the kitchen waste. Great for composting? Well you could at home if you have the inclination, or the Island waste team (aka BIFFA),  will take it away to be either burnt or used as a substrate over the landfill hole at Lynnbottom : so I’m lead to believe.
The result for us home owners: Green plastic galore, lining our front gardens, and pavements. May be this is an opportunity for gardening businesses, such as ours: screening the new eyesores with plants and structures?
The majority seem fixed on possessing their new items; with house numbers being applied in various ways.You could say our home has done this too, only with decorative stickers instead of numbers. We’ve gone for Daffs- which  seems seasonally current. Maybe we’ll need to get some Tulips next month? 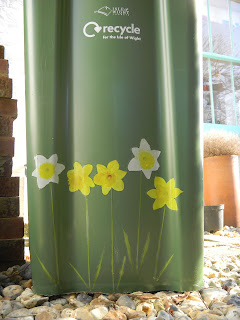